January 2021 comes to an end and a reading/life update...

Hello book friends!  Yes, I'm still around and reading your thoughts and occasionally commenting.  It's good to check in and hear what you've been up to and also relate what I've been doing.  First the doing - well, pretty much the same with almost no changes.  Ha!

I have started working out using our rowing machine on a regular basis.  Yes, we have a rowing machine.  I'm up to 15 minutes a day and though I haven't used it much in the last couple of years, I'm using it now.  Good for building upper body strength.  My walking and yoga continue, but I am certainly looking forward to the cedar pollen waning in our area and then I'll be able to get back outside for my walks.  Only another few weeks to go.

My reading has been going well.  I decided to try to clear some books (i.e. read some books) that were on my actual shelves and also on my Kindle and if I liked them and they kept my interest, I would finish them.  If not, out they go.  Some are re-reads and some are new to me.  I've also been pairing several with the audio version that I can check out at my library and so the story continues whether I am walking or folding clothes or driving.  I've also been catching up on a few podcasts.  My list of books read is below:

And The Shofar Blew by Francine Rivers -  a re-read from a long time ago - enjoyed it again - Christian fiction.

The Best Of Times by Penny Vincenzi - thought I had read this one before but I don't think so - long book - over 600 pages with lots of characters and much drama.

The Stranger Diaries by Elly Griffiths - I really enjoyed this one, which is good because our mystery group is discussing it this upcoming week.  Standalone by Griffiths or standalone at least for now.  A 2nd book with the same investigator will be out in March - The Postscript Murders.

The Lies You Told by Harriet Tyce - domestic thriller - a mother who is a barrister and a daughter at a school with lots of drama - held my interest but not many likeable characters.

Reputation by Sara Shepard - author of Pretty Little Liars and about a hacking scandal at a college - multiple points of view - lots of drama again - a fast read for me.

The Perfect Guests by Emma Rous - lots of secrets in this one - definitely can see the influence of the game of Clue - again, it read very fast for me.

Goodnight Beautiful by Aimee Molloy - husband in this one is a therapist and someone is listening to his sessions with clients through a vent in the ceiling - lots and lots of twists and upside down moments - took inspiration from a Stephen King book (won't say which, but it wasn't one I cared for) - liked it well enough, but glad to move on to the next book.

And that's it for my reading in January.  As I said, our mystery group will be discussing The Stranger Diaries next week and I'm looking forward to hearing what others think.

Otherwise in life, our daughter got her second vaccine dose yesterday.  We suspect it will be quite some time before we're able to get ours, but our county has been doing well with the supply they have been given.  Patience is hard in this regard I think, but we know that even after we get it our lives won't be that different.  Ah well.  I'll just think about spring flowers that will be coming in a few weeks and I'll enjoy sharing some pictures of those when they appear.

Hope you all have a good week and I'll be back in a couple of weeks to share another update.  Take care!

And as a new day dawns, there is hope...for so many things 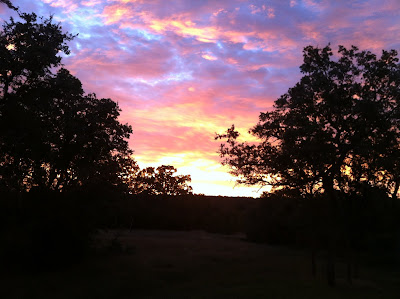 Here are some quotes that remind me that hope is possible and indeed is desirable in so many ways these days.  For people, for ideas, for actions, for our whole world.  My daily prayer...

'But I know, somehow, that only when it is dark enough can you see the stars.' -- Martin Luther King, Jr.

'There is some good in this world, and it's worth fighting for.' -- J.R.R. Tolkien

'I don't think of all the misery, but of the beauty that remains.' -- Anne Frank

'Hope sees the invisible, feels the intangible, and achieves the impossible.' -- Helen Keller

A snowy Sunday and my peaceful reading aim...

Hello book friends!  Stopping by to share a few pictures of our snowy Texas Sunday yesterday.  The weather people said it had been over 15 years since we had gotten as much as fell yesterday - 2004 I believe.  I know many of you get a whole season of snow, but we here in Central Texas get very little.  There are occasions though.  It kept snowing for several more hours after I took these pictures, but it's melting this morning and the sun is out.  It won't stay around long and the best part is that it was almost exclusively a snow event and not an ice or sleet event (which is more likely for our part of the world).  It was beautiful and peaceful to see those big, big flakes falling.  Just wonderful.  I am grateful for peaceful snow. 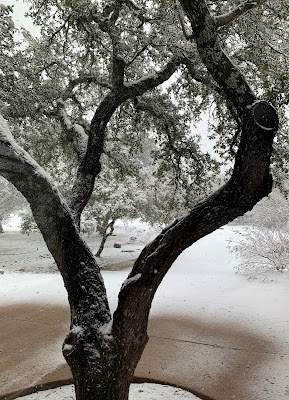 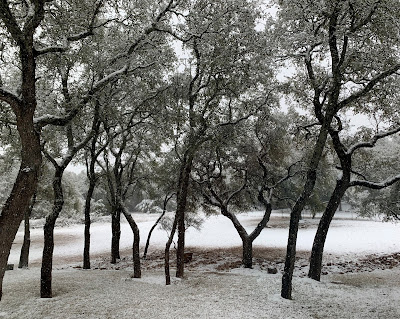 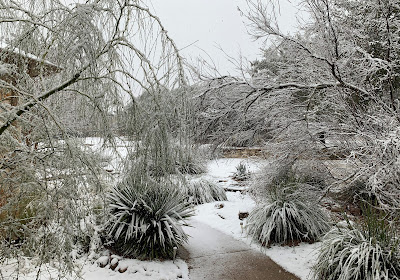 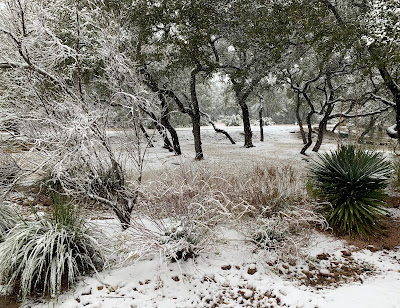 After all the turmoil, sorrow, stress and upset of the last few months and especially more recently, I decided that 2021 will be the year that I focus on 'peaceful reading'.  Not completely sure what that will mean for me.  I have made a point of getting back to some devotional time for myself.  And I've recently read a book or two that I had read many years ago and that reminded me of aspects of the faith that I hold dear to my heart and that I try to live by.  I don't talk about that much on this blog, but I am a person of lifelong faith in God.

I was made very, very sad this last week hearing of a dear friend who is quite ill in the hospital (not with COVID).  She had been diagnosed with dementia a couple of years ago and that condition was progressing very slowly.  She is still at home with her husband, but this last year has been quite hard on both of them.  Her hospital time now is much worse because he can't be with her and she's often confused about where she is and where he is.  All I can do right now is pray for both of them.  So I am.  And trying to turn my mind to 'peaceful' things.  Take care, please, all of you and I pray for peaceful thoughts and actions to help all of us and our world.

The Last To See Her - Courtney Evan Tate

The Last To See Her by Courtney Evan Tate

Genevieve tipped the courier and set the certified letter on the coffee table.  She knew what it was.  She'd been waiting for it for almost a week.  Every day, she'd wondered, Will it be today?  And each day it wasn't.  Until today.

The Last To See Her is my first book completed in 2021.  It was an OK-ish read.  That sounds terrible, but it's my honest opinion.  The first I've read by this author, who writes under the name Courtney Cole and also with darker stories under Courtney Evan Tate.  I was intrigued by the blurb and thought this would be an absorbing missing person story and it was to an extent.  Told through various viewpoints and back and forth in time, we learn that Gen goes missing when she walks out of the hotel suite she and her sister Meg are sharing in New York.  We hear about the 'before' from various people and the 'now' as well.  I would say that this is not so much about the missing aspect as about what the sister, Gen herself, and others thought or didn't think.  There were definitely twists, some I guessed and a few I didn't.  Lots of repetition though.  And by about 2/3 through the book, I just wanted to know the ending.  Almost turned to the end and peeked, but I read on.  I guessed the ending, closed the book, and said - OK, done with that, on to the next.  Not a bad book, but probably not one I'll be tempted to revisit.

A woman disappears into the dark city night…

Gen is on the verge of a divorce from her cheating husband. When her sister, Meg, has a convention to attend in the Big Apple, she invites Gen along to celebrate her newly found freedom. But the perfect sisters’ getaway quickly goes awry when a tipsy Gen defiantly throws her wedding ring off the hotel room’s balcony. Then, wanting some fresh air, she decides to take a late-evening walk alone and vanishes without a trace.

The investigation that follows uncovers secrets—and betrayals—between sisters and spouses that will twist the truth in on itself until nothing is clear.

What really happened to Gen and who, besides Meg, was the last to see her? 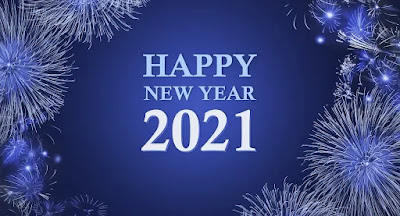 My wish is that each of you have a peaceful and joyful 2021!  Welcome to a new year!  I shared these quotes last year on New Year's Day, but I think they are even more important in 2021.  Enjoy!

“You are never too old to set another goal or to dream a new dream.” — C.S. Lewis

“If you don’t like something, change it. If you can’t change it, change your attitude.” —Maya Angelou“Act as if what you do makes a difference. It does.” —William James

“Be the change you wish to see in the world.” —Ghandi

“Learn from yesterday, live for today, hope for tomorrow.” —Albert Einstein
Posted by Kay at 12:00 AM 36 comments: