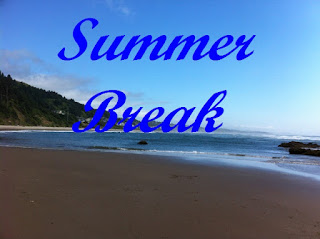 Are we in the 'dog days' of summer yet?  I think we are here in Central Texas.  It's hot and humid and the weeds are everywhere.  Not my favorite time of the year to be outside.  Lovely sunshine, but still.  I've been enjoying my reading though and my yoga and walks (at the indoor walking track).  I'll continue to do that.

I am going to take an 'official' break from blogging.  I'll attempt to keep my 'books read' column mostly current, but we will be taking a trip or two in upcoming days.  Golf tournaments beckon my husband and we'll also be visiting the mountains of New Mexico for a bit.  Enjoy your summer and reading.  And I'll try to see you back around here in a few weeks.
Posted by Kay at 5:49 AM 15 comments: 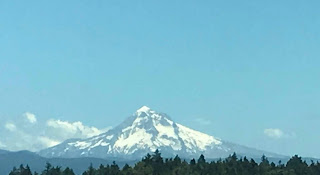 Hello book friends!  Hope all of you have a had good couple of weeks.  I think that for now I'll update by relating what I've been reading every now and then.  We had a quiet but nice holiday weekend - we've felt like our summer has been busy and so it was just about perfect to do nothing much.  My husband played golf - his usual - and I made my way through book after book, while also keeping up my walking and yoga routines.  Last year, we were in the beautiful Pacific Northwest (pictured above).  This year - hot and humid Central Texas - ah, home...ha!  I'll not share another 'bug' picture with you, but let me tell you, the scorpions are out and around - just saying...

I've continued to make my way through Betty Webb's Lena Jones series.  This author, who was once an investigative reporter, shares some tough storylines in these books - very grim.  I've loved the books, but they might be a little rough for some.  Anyway, I've finished Desert Cut, Desert Lost, Desert Wind, and Desert Rage.  You can always click on the covers to the right to learn more about any of the books I've read.  There are 10 books in the series and I'm reading #9 right now, Desert Vengeance.  As I said, I've really liked this series and I'm considering doing the same thing with another series - reading all the books - I just have to think about what series I might pick.  Maybe somewhere cold.

I've also been doing some great audiobook listening.  I read the second book in Dervla McTiernan's Cormac Reilly series.  It's called The Scholar and through the book, the reader gets to know not only more about Cormac and his detective colleagues, we get to get better acquainted with Dr. Emma Sweeney, Cormac's girlfriend.  I can recommend both The Scholar and the previous book, The Ruin.  They are both narrated by Aoife McMahon.

After spending time in Ireland, I shifted over to Asia and began listening to The Tea Girl of Hummingbird Lane by Lisa See.  It is narrated by a number of people and all were quite good.  I'll be leading a book group discussion of this book next week and so I was very happy that I liked it so much.  With various themes of tea production, harvesting, and a mountain culture steeped in tradition, there were also modern aspects that were most interesting.  One storyline concerned adoptions of Chinese girls and that one was most relevant to my life as we have two nieces who were adopted from China.  I appreciated many of the issues brought up and look forward to talking with the group about their experience with the book.

Another book group member related to me that she had just finished reading Lisa See's new book - The Island of Sea Women.  She said I should try that one too and so I did.  Wow.  Location shift to Korea and the female divers of Jeju Island, off the coast of Korea.  This way of life is something I can't even imagine, but I was quite, quite enthralled.  Another book that I highly recommend.  Based on life in that region and the changes that have come, the timeline runs from the 1930's to the present.  It was narrated by Jennifer Lim.

I think that's about it for the last couple of weeks.  I hope you are all enjoying your summertime reading.  Take care and I'll try to get back around in a bit to share more.
Posted by Kay at 12:00 AM 44 comments: