And March blows in...catching up... 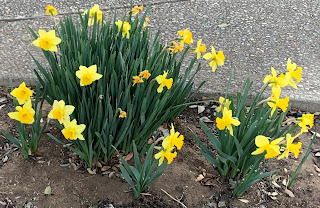 Hello book friends!  Can't believe that we are halfway through March!  Where does the time go?  Happily, I saw some flowers blooming a couple of days ago on my morning walk.  Pretty yellow daffodils (right?).  I hope that means that other lovely flowers are just around the corner.  I have noticed that spring is a bit slower to show up here in our new area.  It's curious to me that only a few miles west and a bit south and the climate is noticeably different.  I'll adjust though.  Really hoping that we've seen our last low temperature in the 20's for the season.

I think the last time I posted about my reading here I was doing some catch-up on a few mystery series that I enjoy.  Since that time, I've read these books:

Last Seen Alive by Joanna Schaffhausen (5th in her Ellery Hathaway series) - hoping it's not the last, but some storylines are mostly resolved.  Really recommend this series.

The Deepest Of Secrets by Kelley Armstrong (7th in her Rockton series) - I think this might be the last of this series, but who knows?  I do know that the author has a new series starting in a few weeks.  It's A Rip Through Time and I'm on the hold list at the library for this one.

Miss Moriarty, I Presume by Sherry Thomas (6th in her Lady Sherlock series) - again, the series progresses and I'll be curious to see where she goes from this point.  Not sure it's the end though.

The Appeal by Janice Hallett - this is the debut book by the author and I'm a bit torn about what to share here.  It's an epistolary novel (which I normally love) and it's a mystery, but...it's more than a bit odd.  A little tough to say exactly what it was in the end.  Told in emails and texts and letters and having some quite annoying characters, I finished it and said, 'Ok, on to the next.'  Take from that what you may.  Ha!  Have any of you read this book?  Curious what others might get from it.

I missed the first two book groups in March.  Out of town for one and had an allergy sinus headache for the other.  The Historical Fiction book group discussed These Is My Words by Nancy Turner.  I had read that one many years ago, but knew I would not be here.  Didn't reread it.  The book selected for April is The Gods Of Gotham by Lyndsay Faye.  I have also read that one in the past and plan to read it again.

The second week group is the Brown Bag book group.  They discussed The Library Book by Susan Orlean.  I had skimmed that one after having discussed it with another book group some years ago.  Haven't talked to the librarian yet to see how it went.  The April selection is Behind The Scenes At The Museum by Kate Atkinson.  Again, have read that one long ago, but I'll do a reread.  I think this book was the author's first book.

Tomorrow afternoon is the Shrouded in Mystery book group and the discussion will be about The Stranger Diaries by Elly Griffiths.  I just finished a reread of that book and enjoyed it thoroughly again.  I really need to get to the second book, The Postscript Murders.  Have you read The Stranger Diaries?  Lots of Gothic fun.  The April book for this group is After The Crash by Michael Bussi.  And I haven't previously read this one.  Yay!

The fourth week book group is the Talking Texas book group.  I'm currently rereading Elizabeth Crook's Monday, Monday for that discussion.  I was part of a group that discussed this book soon after it was published (2014) and we were able to speak online with the author about it.  Not everyone has loved this one, but it does give a good account of Austin and surrounding area during and just after the University of Texas Tower shooting in 1966.  The story tells of three students that were there that day and how that tragedy affected their lives for decades.  I do think the book is better in the early parts and then kind of gets a little 'soap opera'-ish in the second half.  Will be curious what others in the group think.

Think that's about all I have for today.  In regular life, not much to tell.  We're still back and forth a bit to Austin.  My husband's company will return to the office next week for the start of their 'hybrid' work.  We're hoping to be able to take a trip in early summer to North Carolina.  And our renovations will one day happen.  Have a good rest of the week!  And I'll be back in a while with more pictures hopefully.  Take care, everyone!