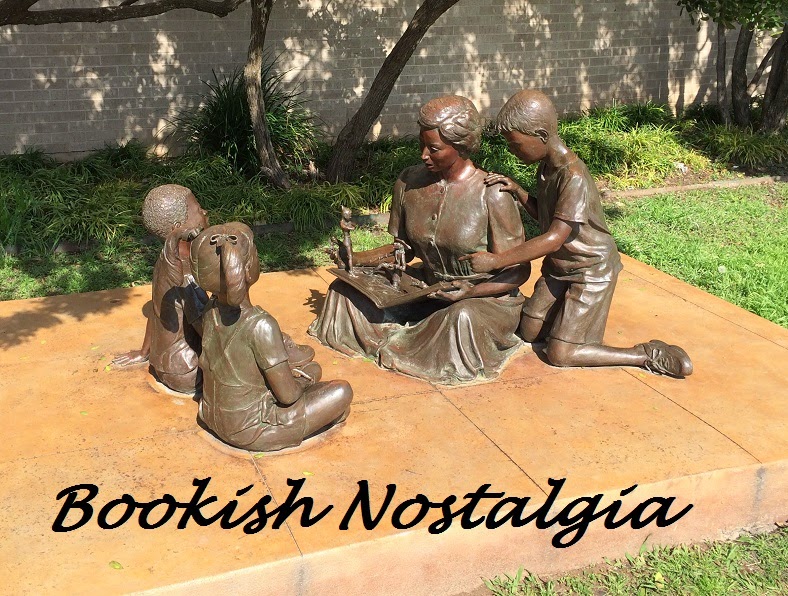 When I had my previous blog, My Random Acts of Reading, I did a feature now and then that I called Bookish Nostalgia.  I talked about books or authors that had been favorites at earlier times of my life - as a kid or a teen or my early 20's.  I had fun with it, but I kind of ran out of ideas and topics and I don't want to duplicate those.

Several of my favorite bloggers have their version of looking back at what they've read in the past.  Tina at Tina Says does this early each month.  She shares what she was reading in that month 10 years before and calls it Blast From the Past.  I love it and you should take a look.  A new-to-me blogger or one I found after I came back and began this blog is Cleo at Cleopatra Loves Books.  (You should read her blog too!)  She started a monthly event called Five of the Best.  In it, she highlights her favorite book from each of the last 4 years, plus the current month.  Again, lots of fun.  Some other blogs have also shared these "look backs" and I'm sure there are more that I don't know about.

I've decided to renew my Bookish Nostalgia tag, tweak the "looking back" and make it a monthly event as well.  I've shared that I've kept a book journal of my reads for almost all of the last 22 years, since 1993.  I thought I would check my journals and see what I was reading 20, 15, 10, and 5 years ago.  My reading has changed some over the years, but I was always more of a mystery reader than anything else.  However, not completely.  Some of the books are no longer in print.  Some authors are gone now.  It has been interesting to see how much I could remember about the books (in order to pick a favorite), but I also sometimes have a vivid memory of what was going on in my life at the time.  So, here's my first Bookish Nostalgia.  My favorite book from April of:

April 1995 - Desert Heat by J.A. Jance - The first book in her Joanna Brady series, set in Cochise County, Arizona.  About the widow of a deputy sheriff that takes her husband's place in law enforcement.  This series is still on-going and is up to 14 books.  A very good beginning.

April 2000 - To Play the Fool by Laurie R. King - 2nd book in the Kate Martinelli series about a homicide cop in San Francisco.  There were 5 books featuring this character.  Laurie R. King also writes the Mary Russell and Sherlock Holmes long-running series.

April 2005 - Colony by Anne Rivers Siddons - This is a family saga of a woman from the South Carolina Low Country who marries a Boston man and spends summers at his family's home on the coast of Maine.  Her mother-in-law is very domineering, but as time passes, the young woman adjusts and becomes more like her husband's mother than she would ever dream.  I just remember that I loved this book.  It's a little long, 640 pages, like any good family saga.

April 2010 - Paula by Isobel Allende - When this noted author's daughter, Paula, became ill and fell into a coma, she wrote this book about her family.  It begins, "Listen, Paula, I am going to tell you a story...".  I read and discussed this book with a reading group.  It's one I still remember so well, a very moving story.

Well, that's what I remember of the Aprils of years past.  Please let me know what you think of this feature.  And if you've read any of these books.  Thanks, as always, for visiting.
Posted by Kay at 12:00 AM