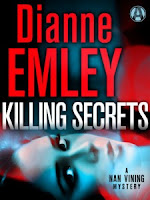 Killing Secrets is a fast paced thriller by Dianne Emley.  It's also the 5th book in a series featuring Nan Vining of the Pasadena Police.  Now, most of you know that reading books out of order in a series is not preferred by me.  Yes, I'm a 'must read 'em in order' sort of person.  However, I took the plunge and dove right in to this one.  And you are likely asking, will she read the previous books?  Yep.  Several incidents were referred to as the story progressed and I thought 'gotta find out about that'.

Our story begins as Emily Vining, age 16, runs through a park, supposedly taking pictures for a school assignment, with a boy her mother doesn't even know about.  The two teens kissed and played and then everything changed.  Below them, in a small ravine, are two bodies - a young woman and a teenage boy.  As it turns out, the woman is a teacher at their school, Erica Keller, and the boy, Jared, is a fellow student.  Emily's mother, Pasadena Homicide Detective  Nan Vining, arrives at the scene to find Emily shaken, but basically all right.  Nan also finds that Emily has a boyfriend she didn't know about, a young man who is the stepson of a prominent local defense attorney.  Oh, and there are a few other changes in her daughter's life that Nan had not been aware of.

Detective Vining, who is supposed to be on vacation, is not allowed to participate in this investigation, which very quickly is labelled a murder/suicide.  Before any time has passed, the police declare that the case is closed.  The press release states that Jared Hayword, a disturbed teen, has murdered his teacher, Erica Keller, and then killed himself.  Nan is stunned that things have wrapped up so quickly and then she is suspicious.  After poking around a bit, she finds that there are many questions left unanswered.  The boy's mother is adamant that her son would not have killed anyone.  Erica Keller was married to a police sergeant and their marriage had become rocky, with a restraining order issued.  Is there a cover-up?  Even though she's being warned off, Nan can't let it go.  And there are some powerful and influential people that intend to see that both Nan and Emily Vining are silenced.

I found this book pretty interesting.  I did wish that I knew more of the back story, but that was more of a personal wish than a necessity.  This story stands on its own.  The mystery itself was not terribly complicated.  I guessed the identity of the murderer early on.  However, I enjoyed the fast pace.  I did feel that both mother and daughter had a tendency to throw themselves into danger with regularity.  Not surprising.  It was that kind of book.  The depiction of teen life seemed valid.  Lots of social media and dependence on electronics for pretty much every aspect of news.  The way that rumors spread almost instantaneously and, despite kids being tech savvy, the cluelessness about what might be unwise or dangerous regarding shared information online.

Would I read another book by this author?  Yes and I'll be looking for the four previous Nan Vining mysteries.  I give this book a 1-3/4 thumbs up.

Thanks to Lisa at TLC Book Tours and the publisher for sharing this book with me.  The other stops on the tour can be found here.  The author's website is here.  And, there is a giveaway below.  Please feel free to enter to win a $25 eGift Card and a copy of Killing Secrets.