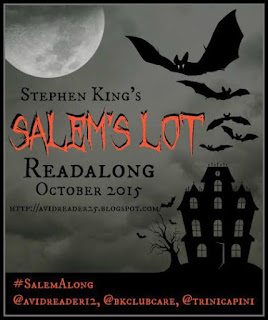 I was delighted to participate in the Salem's Lot Readalong that was hosted by the lovely ladies, Melissa, Trish and Care.  Totally delighted.  Thanks to all of them for thinking of it, suggesting it to all of us, and giving me a little push to read this long-loved book by Stephen King.  Also thanks to Melissa for my little extra that she sent.  You can see it in the picture below. 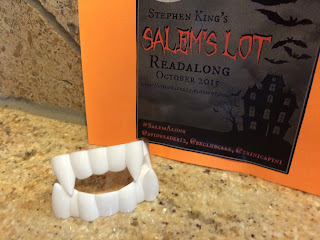 Salem's Lot is the perfect October read.  Truly.  Well, maybe if you don't like vampires, it may not be.  But for me.  Yes, yes, yes.  And as much as I love Edward Cullen (and I do), King's vampires definitely do not sparkle in the sunlight.  Ha!

This was actually the first Stephen King book that I read - way, way, way back when I was a junior in college.  I remember that I was waiting for my car to be serviced at Sears.  I walked over to a nearby grocery store to buy a soft drink and took a look at the paperbacks that were on one of those turning displays.  This was the cover that I saw:

A little creepy, right?  Or maybe more than a little.  I bought the book and started to read.  The first book I ever read that included vampires.  I had not read Dracula at that point and I think my impressions of the Count were tinged with laughter.  Bella Lugosi and company.  This was the time of Young Frankenstein and I thought that 'I want to drink your blood' sounded comical.  Hmmm...not so much to Mr. King.  I honestly remember being pleasantly scared and then not so pleasantly as I continued reading.

I went to college in Abilene, Texas - land of wind and dust storms.  My roommate was gone that weekend and as I read further and further into the story, the wind rose and the screens on the windows rattled.  I think I was at the part where it was apparent that the person had to invite the vampire in.  I heard scratching at the window.  I about jumped out of my bed.  Still a vivid memory.

By the time I finished Salem's Lot, I was a fan of Stephen King.  I went on to read many of his books and The Stand is one of my favorite books ever.  I loved how he took the ordinary - a pet, a car, a flu, a teenage girl that feels left out, a hotel closed for the winter, or even clowns or spiders - and made the situation extraordinary.  He dared to confess that he still thought there might be something under the bed or in the closet or outside the window.  I was happy to know that I wasn't the only one that didn't dangle my arm over the side of the bed or my foot.  I wasn't the only one who always, always looked in the backseat before I got in the car (still do).

I listened to Salem's Lot on audio, read by Ron McLarty.  He did a good job.  The tension was still there.  Maybe not quite so much as when I was 20.  I've learned a lot about horror stories since 1977.

I did notice some fun cultural details that brought back memories.  Everyone smoked so much.  Wow.  That's how it was.  And they smoked everywhere.  Drive-ins.  Used to love the drive-in (and not for that!).  Even little things like 'putting down the phone receiver'.  And who remembers Wolfman Jack?  He might have been the most famous disc jockey of that era.  I could get his show late at night on a radio that I had in my room at home.  Loved his voice.  I've never been to Maine, but I feel that Stephen King made all of us think that the woods were certainly 'dark and deep' there.

I know this hasn't been a review of any sort, just a mishmash of my thoughts.  However, it has whetted my appetite to do some re-reading of my favorite King books.  It's about time for me to visit The Stand again and did you know that Mr. King won an Edgar Award for a book recently, Mr. Mercedes?  Who would have thought it?  Thanks again, Melissa, Trish and Care!  A perfect October read.
Posted by Kay at 12:00 AM