New doggy friends and a bit about reading...

Hello book friends!  So nice to be here again this week with a few pictures and things to talk about.  Hope you are all well and safe and content (as much as you can be).  For those who have kids where school looms or has started, hope all goes well in that regard - whether it's in the school, at home with remote learning, or homeschooling.  Also, those who have had some extra challenges lately, know that I'm still thinking of you and keeping you in my prayers.

My pictures this week are of two neighbors that I've met over the weeks and months that I've been out walking in the early mornings.  Actually, I've met or greeted or waved to a number of neighbors that I only vaguely knew.  These two though - they are dogs and such fun to see each morning.  Oh, and also their 'Dad' who walks them faithfully. 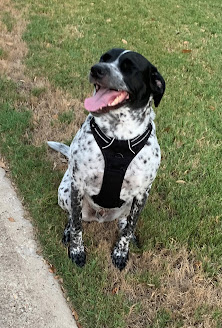 This is Snoopy and he is a very well behaved neighbor.  He sits or explores a bit when I am greeting his 'Dad' and 'Sister'.  Snoopy doesn't bark or jump, but he sometimes looks like he's thinking 'I thought we were walking...aren't we walking?' - ha! 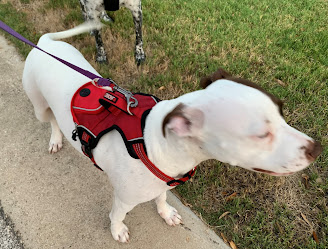 This doggy neighbor is the active, jumping, greeting, straining-at-the-leash because she's so friendly and needs to know everyone - Eukie.  She's 7-months-old and is in training to learn to sit and behave when it's appropriate.  I wasn't able to get a picture of her face because she is constantly wriggling and wagging her tail and looking for the next sight to see.  You can tell from the blur of her head and tail what's going on.  She doesn't bark though.

I've enjoyed getting to know these new-to-me neighbors and their 'Dad'.  After Eukie straining and straining morning after morning, he asked if I'd like to 'meet' her.  He and I were distanced, but Eukie and I were not - ha!  So now, every morning, we meet all over again.  I'm not much of a dog person, but Eukie reminds me of one of our granddogs, Cody.  I can just imagine what antics she and Cody could get up to.

As to other stuff, like reading, I finished Sycamore Row by John Grisham.  I'll report next week on our afternoon book group's discussion of the book and what others thought of it.  It was longer than I expected.  I did a read/listen and the audio was over 20 hours long.

Next, I started David Baldacci's Memory Man.  Our mystery group read and discussed this book a while back, but I was out of town and didn't read the book at that time.  I'm enjoying it now and will report on it next week as well.  Another long one.  I've been listening to Final Girls, a reread for me, and Riley Sager's first book.  I had commented to someone that I thought it was my favorite up to now of the Sager books I've read.  Decided I would listen to them all again.  Why not, right?

Not much else to tell.  Again, hope everyone is doing well.  See you next week!