Top 10 Tuesday - kay's favorite couples in mystery series...yes, there can be a bit of romance in crime novels

Top Ten Tuesday is a fun weekly event that is now hosted by That Artsy Reader Girl.  This week's topic is a 'Love Freebie' and so I've decided to talk about my 'Favorite Couples in Mystery Series'.  Some of these are partners or friends or 'more than friends' or married.  Some have moved through those steps.  And, as I said in the title, yes, there can be a bit of romance in crime novels!  You knew I was going to bring the topic around to mysteries and thrillers, right?

I worried a little bit about spoilers here, but honestly, if you read many of the blurbs for these ongoing series, you'll get the idea about the couples.  And, as I said above, many of them moved through several steps before they got to the true 'couple' status.  I read many mystery series because I enjoy visiting the characters over and over and finding out what is next in their lives.  Sometimes, love is next.

1.  Eve Dallas and Roarke - J.D. Robb - Eve is a homicide lieutenant in the New York Police.  Roarke is an ex-criminal who has more money than he knows what to do with (billions).  46 books in the series.  Naked in Death is the first.

2.  Armand and Reine-Marie Gamache - Louise Penny - Armand is now Chief Superintendent of the  Sûreté du Québec.  Reine-Marie is a retired librarian.  They are a lovely, lovely couple who anchor these books through the storms.  13 books in the series.  Still Life is the first.

3.  Amelia Peabody and Radcliffe Emerson - Elizabeth Peters - Amelia is an Egyptologist and Emerson is an archaeologist in late 19th and early 20th century England and Egypt.  A very devoted and 'equal' couple.  20 books in the series.  Crocodile on the Sandbank is the first.

4.  Daisy Dalrymple and Alec Fletcher - Carola Dunn - Daisy is a well born woman who becomes a journalist in the 1920's.  Alec Fletcher is a Detective Inspector with Scotland Yard.  22 books in the series.  Death At Wentwater Court is the first.

5.  Alafair and Shaw Tucker - Donis Casey - The Tuckers own a large farm in rural Oklahoma in the early 1900's.  They have 10 children.  Alafair is the sleuth, with Shaw to keep her grounded.  10 books in the series.  The Old Buzzard Had It Coming is the first.

6.  Deborah Knott and Dwight Bryant - Margaret Maron - Deborah is a district court judge in Colleton County, North Carolina.  Dwight is a deputy sheriff in the same county.  Deborah has a very large family - 11 older brothers - and her father was a bootlegger.  20 books in this now completed series.  Bootlegger's Daughter is the first.

7.  Clare Fergusson and Russ Van Alstyne - Julia Spencer-Fleming - Clare is an Episcopal priest and Russ is the Chief of Police in Millers Kill, New York.  Their relationship is complicated.  8 books in the series.  In the Bleak Midwinter is the first.

8.  Duncan Kincaid and Gemma James - Deborah Crombie - Both Duncan and Gemma work for Scotland Yard.  He is a Detective Superintendent and she is his Detective Sergeant.  17 books in the series.  A Share in Death is the first.

9.  Thomas and Charlotte Pitt - Anne Perry -  Set in Victorian times, Thomas is a police inspector and Charlotte is his well-born wife.  Charlotte's family and social connections are often valuable in solving the crimes that Thomas investigates.  32 books in this series.  The Cater Street Hangman is the first.

10.  Kate Burkholder and John Tomasetti - Linda Castillo - Kate is the Chief of Police in Painters Mill, Ohio, which has a significant Amish population.  Tomasetti is an agent with the state police.  9 books in the series.  Sworn to Silence is the first.

There are many more couples in mystery series, but these are the ones that come to mind first.  And I'll leave you with one more couple (or maybe two) - not from a mystery - but from a swashbuckling book, The Princess Bride.  When thinking of great couples, who doesn't think of Westley and Buttercup?  However, I also think of Miracle Max and his Valerie. 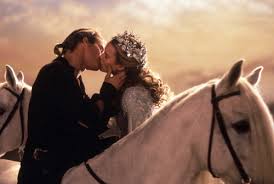 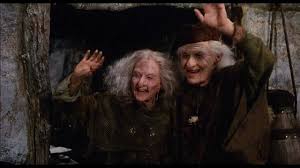 Hope your Valentine's Day is a happy one!
Posted by Kay at 12:00 AM