A gorgeous sunrise on my morning walk and more R.I.P. reading... 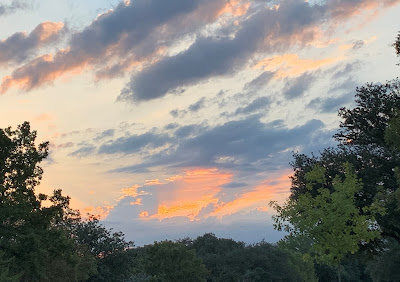 I'll start this update post by sharing a picture of a sunrise I enjoyed last Wednesday morning.  My walks are starting later because the days are getting shorter, but that means I'm getting to enjoy being out there when these wonderful sunrise colors are right in front of me.  I find that quite, quite pleasant - cool mornings, pretty skies, good audiobooks, enjoyable walks.  It's all good.  Hope life is good in your part of the world.

We took a quick overnight to Austin this week and had a nice birthday dinner with our daughter and son-in-law.  My husband had a couple of appointments the next day and then we headed back to Kerrville.  It's nice to be able to do that and the drive is only a couple of hours.  Otherwise, my reading is still going well as is my volunteering.  We have a new roof on our house and will soon have the trim and fascia painted and then the new gutters will be installed.  Progress!

As to reading, I'll list a bit about 4 books I completed since I last shared here.  All fit in with the R.I.P. theme, but then we all know that almost all of what I read falls in the mystery/crime novel world.

The Sun Down Motel is by Simone St. James and I liked it a lot.  Set in upstate New York and told partly in 1982 and partly in 2017, this is a 'deliciously creepy' (according to Riley Sager) story with many Gothic themes.  It tells of the disappearance of Viv Delaney in 1982 and the very odd happenings at The Sun Down Motel where Viv worked as a night clerk.  Carly Kirk is Viv's niece and she's heard about her mother's sister all her life.  Carly goes to Fell, New York to try to figure out what happened to her Aunt Viv.  I found the book and it's ghostly aspects quite absorbing and I am looking forward to discussing it with a new book group later this week.  This is a book group that I haven't tried yet so we shall see how it works and what the other members think of it.  A good October selection I think.

My next book was Dark Roads by Chevy Stevens.  I liked it a lot too.  I think I've only read one other book by this author, but I do remember seeing her at a mystery conference a few years ago and getting to meet her.  Dark Roads is set in British Columbia and the author grew up on Vancouver Island and still lives on the island.  The story tells of the Cold Creek Highway and the girls that have gone missing there over many, many years.  It's also based in part on actual events and Stevens shares some thoughts on that at the end of the book.  Hailey McBride grew up in Cold Creek and her father taught her how to survive in the woods.  He is killed in an accident and Hailey must live with her aunt and uncle and then Hailey goes missing as does another local woman, Amber.  A year later, Amber's sister comes to find out what happened and things really start heating up.  Lots of twists and turns and secrets here.  Pretty scary stuff, so maybe not a story for those who prefer more gentle tales.  FYI.

The Fiancee' by Kate White was my next selection.  I've read several books by Kate White who used to be the editor of Cosmopolitan magazine.  I liked this one well enough, but not as much as the previous two books.  This was about a family that gets together annually for a week at the parents' house - 4 brothers and their wives.  Well, 3 wives and 1 wife-to-be.  We see things from Summer's perspective.  She's married to Gabe.  When Nick introduces the family to his new 'flame' Hannah, Summer is sure she's met her before, but Hannah says not.  Later there's a death and then maybe another.  Secrets, lies, all the usual.  As I said, I liked it but it didn't break 'new ground' with me.  On to the next.

Lastly, I finished My Sister's Bones yesterday.  This one was written by Nuala Ellwood in 2017 and it was her debut novel.  I 'discovered' it on my Kindle and dove in.  Do you ever have books that you've forgotten you even owned?  I do.  Ha!  Nuala Ellwood is from a family of journalists and her main protagonist here is also a journalist.  Kate is a well-known war reporter and she's spent a lot of time in Syria.  She's witnessed many awful things and then told the stories of the people involved to her readers.  After her mother dies, Kate comes home.  She's not well herself and suffers from PTSD which causes her to have bad dreams and possible hallucinations.  Kate has a sister named Sally, but Sally too is unwell.  They had a tough childhood.  Sally's husband Paul tries to help out, but when Kate becomes convinced that bad things are happening next door it's hard to tell if there is really a problem or if it's all in Kate's mind.  It took me a while to get wholly involved in this story, but I hit a point where I couldn't put it down.  I'll be looking for more books by this author.

That's all I have for this post.  I've started Twenty-One Days by Anne Perry.  It's the first book in her Daniel Pitt series and is the November selection for my former mystery group.  I think this one will suit me very well - not quite as grim.  Take care and I'll be around again soon to let you know what I've been reading.  Happy Fall!!