Last post about our trip to North Carolina.  I wanted to share pictures of two bookstores we visited and, of course, I bought a couple of books.  Not too many as I was having to transport back by air.  Anyway, hope you enjoy these.
The first bookstore is in downtown Asheville and it's called Malaprop's Bookstore/Cafe.  We really enjoyed looking around the store and I bought one of those 'blind date'-type books.  More about that below.  The employees were very friendly and there was a great display of local/areawide authors that was fun.
I learned that an author that I'd been aware of, but not read, was from the area.  His name is Mark de Castrique and he has a mystery series, featuring Sam Blackman, that's published by the Poisoned Pen Press.  It is set in Asheville and, as I said, I'd been aware of his books - probably saw them at the Poisoned Pen Bookstore.  Anyway, I was glad to know the Asheville connection.
I also had vaguely known that Zelda Fitzgerald had been mentally ill and hospitalized for a portion of her life.  It turns out that she had been a patient at Highland Hospital in Asheville and actually died in a fire at that hospital.  Anyway, Lee Smith, an author that I've read a couple of times, wrote a book called Guests On Earth, and it's a fictionalized account of mental illness treatment in the early 1900's and includes the fire at Highland Hospital where 9 women died in the fire.  I'm planning on reading Guests On Earth at some point.  As I said, nice display about area authors. 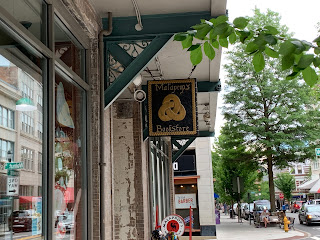 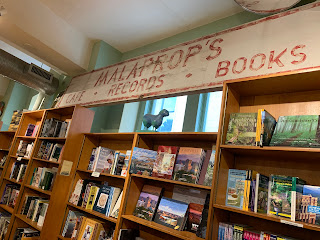 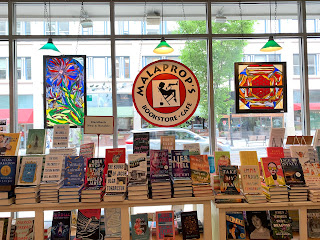 My 'blind date' book is below.  As you can see it was wrapped in brown paper and had 'Asheville landmarks, Mystery and murder, Quirky characters, Amazing animals, Roller derby, And a bird to love' as a teaser.  Yes, they had me at 'Mystery and murder'.  When I bought the book, the staff at the checkout desk said that I would likely not guess the author if I wasn't from the area.  And I did not guess. 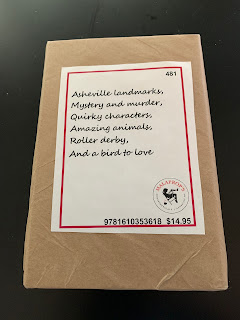 When I unwrapped the package, I found As The Crow Dies by Kenneth Butcher.  I haven't started it yet, but I'm looking forward to it. 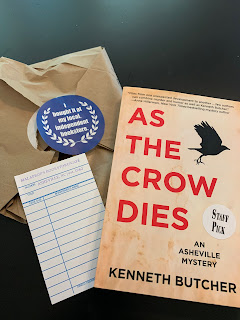 The second bookstore that we visited was in the little town of Hickory, North Carolina and called The Book Exchange.  It's between Asheville and Charlotte.  A fun little used bookstore that I enjoyed wandering around for a bit. 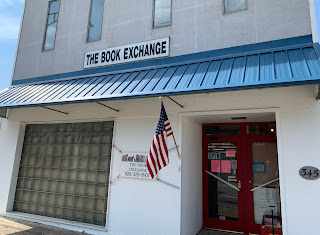 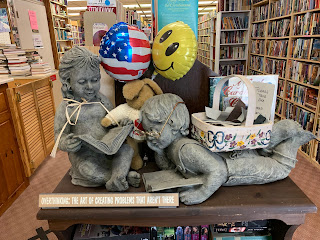 I told the lady behind the counter that I was checking to see if they had any of Mark de Castrique's books, since I had just discovered that Asheville mystery series.  Happily, they did have one book and I snatched it up.  It's the 7th book in the series and entitled Murder In Rat Alley.  The first book, which my local library happily has, is Blackman's Coffin and I think there just happens to be a picture of the Biltmore on the cover.  Ha! 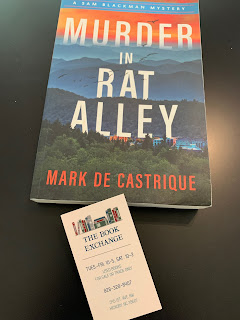