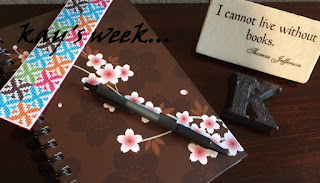 I had a great week in the reading area.  I finally finished Kelley Armstrong's first book in her Rockton series - City of the Lost.  It's not that I wasn't enjoying it or absorbed in the story.  I just kept having to stop and read other things.  In any case, I did like it very much and have begun the second book, A Darkness Absolute.  This series takes place in the wilds of Canada.  Rockton is a small town that people come to when they are escaping from bad things in their regular life.  Casey Duncan was a homicide detective in her former life and she's one of three people who comprise the police in Rockton, a town definitely off the grid.  Interesting concept.

I listened to The Silent Patient, a debut thriller, by Alex Michaelides.  It was narrated very ably by Jack Hawkins and Louise Brealey.  It's about a woman artist who apparently kills her husband and then refuses to speak ever again.  She is placed in a secure unit and a therapist makes it his mission to get her story.  It's told by the therapist and also through the woman's diary.  I especially enjoyed the interview at the end of the book with the author.  He told of his upbringing in Cyprus and how this story is based on a Greek tragedy by Euripides.  I liked the story itself, though I did figure it out.

The other two books I read were both compilations of short stories by P.D. James.  Both were published after her death, but the stories had been published previously.  They were Sleep No More and The Mistletoe Murder.  I always think that I don't really like short stories all that much.  However, as I was doing a read/listen of these books, I remembered that I've read every single short story written by Agatha Christie.  And liked them.  I have not read any of P.D. James books - and I'm not sure why - however, I'm going to change that.  I'll tell more below as I discussed the first book with a book group.  Both were narrated by Daniel Weyman and the second also included Jenny Agutter.

I attended a book group that I rarely go to this week and it was a kind of funny experience.  I saw a former colleague at another local library and she asked if I was coming to book group.  They were reading a short story collection by P.D. James.  She knows about my mystery love.  I've attended her group now and then, but it's hard to keep up with the reading for too many groups.  Anyway, I decided to try the book and go.  I'm good friends with the leader and worked with her in the past.  She does a good job of moderating.  The group is nice and I recognized a few faces.  However, they do not read mysteries very much.  I rather silently giggled as they related their views about British mysteries (don't like them much), about Agatha Christie (she 'tricks' the reader), and about having a hard time keeping up with characters even though these were short stories.  One lady took copious notes of each story and another said she found it completely obvious deciding who committed the crimes because the story was too short.  The people were too 'stiff upper lip' and not emotional enough.  Justice wasn't served.  There were no thrills.  As I said - I giggled inside.  I did share a bit from the beginning of The Mistletoe Murder, which was not the book we were discussing.  In it, Val McDermid writes the forward and tells of her admiration for P.D. James.  The prologue of that book is by James herself and she relates how writing short stories is different and challenging for an author.  Well, different strokes for different folks.  Everyone has their own 'comfort zone' in reading.  Mine usually involve crime and bodies.  Ha!

I'll share a picture here that I've meant to share since last summer.  The Ruidoso area of New Mexico has some wild horses that live up in the mountains.  These lovely creatures will come down for a bit now and then.  Other creatures come down too - bears, mountain lions, elk - it's hard to catch the horses though and, when my husband and I saw these in someone's yard, we snapped a picture.  Yes, these horses are a wild herd that roam in the Ruidoso/Alto area.  Sometimes, we get lucky and see them.  Cool, right?