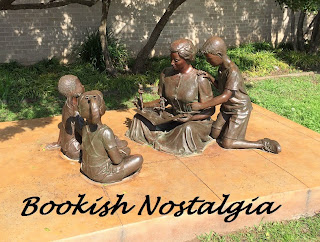 January 1998 - Shakespeare's Landlord by Charlaine Harris is the first book in this author's 5-book series featuring Lily Bard, a housecleaner in Shakespeare, Arkansas.  Harris herself is from Arkansas and this was her second series after her Aurora Teagarden, librarian, series.  I read all the books about Lily and always wished there were more.  It's considerably darker than the Aurora books, but I think it has been recently republished after the author's fame for her Sookie books and TV series and also the Midnight, Texas series and the Aurora movies.  Amazing that Charlaine Harris has kept on going with so many creative books.

January 2008 - At Home in Mitford by Jan Karon, the first in the gentle series featuring Father Tim and the small town of Mitford.  There are now 14 books in this series.  It is charming and not overly religious at all.  In 2008, my life was quite stressful.  I had parents that were both living in care centers - separate ones - and was working full time at the library.  My own health had some major problems that year as well.  Nan from Letters From a Hill Farm suggested this book for me as I was having trouble focusing on reading at all.  It was perfect for me and I went on to read the next 2 or 3 books in the series.  I'm grateful to her and also grateful to the author for providing some much-needed distraction at that time.

January 2013 - The Lewis Man by Peter May, the 2nd book in a trilogy set in the Outer Hebrides of Scotland and featuring Fin MacLeod, a former policeman, who has returned home to Lewis Island and a new life.  The first book in the series is The Blackhouse and the 3rd is The Chessmen.  All are highly recommended.  The Lewis Man concerns a body found in a peat bog and the father of Fin's former girlfriend, Marsaili.  It is very, very interesting as Tormod MacDonald is a victim of dementia and doesn't remember anything about the body.  I love books set in this area of the world - stark, windy, bleak, and amazingly beautiful.

Well, that's it for January.  Have you read any of these books and what did you think of them?  Come back around next month and see what I remember about February of the years included.
Posted by Kay at 12:00 AM