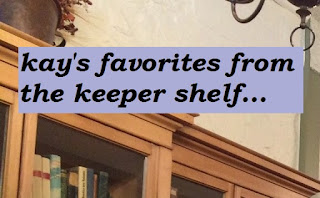 Welcome to the 3rd 'kay's favorites'!!  I'm so happy to be highlighting an author whose work I have truly loved over the last 20 years or so.  Her name is Dana Stabenow and she writes, among other things, a favorite mystery series of mine featuring Alaskan Kate Shugak.

I was beyond excited to get to meet Dana this last weekend while attending the Left Coast Crime Convention in Phoenix.  I got this lovely picture of Ms. Stabenow when I spotted her (no, I didn't stalk her...really!) in the hotel lobby relaxing for a moment.  Yes, I marched right up and said, 'I love your books!' and I'm writing a 'favorites' post about you.  She, being a kind woman, asked if I wanted a picture and I did.  This was the result.  There will also be a picture shared on Monday of the two of us (she looks like the better half) as part of my 'fangirl' post.  It was a terrifying and wonderful encounter for me.  So, let me tell you about this 'favorite' author. 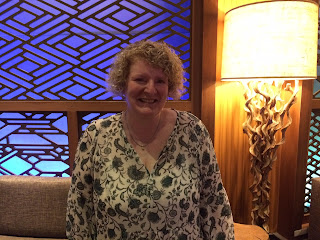 I was raised on a fish tender in south central Alaska, and I knew there had to be a warmer, drier job out there somewhere.


Short and sweet.  The longer version relates that she was indeed raised on a 75-foot fish tender in the Gulf of Alaska.  The Great Alaskan Earthquake occurred in 1964 during her 12th birthday party - mega fun, huh?  Dana put herself through the University of Alaska working for a seafood company.  After she graduated with a degree in journalism, she spent 4 months backpacking through Europe, spending what little money she had.  Coming home pretty much broke, Stabenow found that work had begun again on the TransAlaska Pipeline.  She began working for various companies connected with oil and gas, made a very decent living, and vacationed in Hawaii often.

At the age of 30, Dana took a look at her life and decided to enroll in a MFA program and try to write a book.  She got her Master's degree and her first science fiction novel, Second Star, was published in 1991.  A Cold Day For Murder, the first Kate Shugak book, came out in 1992 and it won the Edgar Award in 1993.  And she was off....

There are now 20 books in the Shugak mystery series, as well as 4 books in the Liam Campbell series.  This author also has written several science fiction novels, a couple of stand alone mysteries, and most recently, a historical trilogy based on the life of Marco Polo's granddaughter.  It is called the Silk and Song Trilogy and includes the titles, Everything Under the Heavens, By the Shores of the Middle Sea, and The Land Beyond.

Let me tell you just a little bit about Kate Shugak and her Alaskan world.  I'll also share a couple of books in the series that I love.  Kate Shugak is an Aleut and she lives on a homestead in 'The Park'.  Kate comes from the village of Niniltna and she went away to Anchorage to go to school, have a career, and live life.  After a particularly horrifying child abuse case, Kate has left her job as an investigator for the Anchorage DA's office and come home.  She lives with her half-wolf, half-husky dog, Mutt, and these two ladies do very well together.  In A Cold Day For Murder, a young park ranger has gone missing and Kate is asked by her old boss and the FBI to assist in determining what happened.  And we begin our tour of Alaska, visiting all the many locations and very interesting people that live in that far northern state.

Another of my 'must read again' entries in this series is the 4th book, A Cold-Blooded Business.  This story takes place in the oilfields of the North Slope, brutal, cold country.  Kate goes undercover, at the bequest of the Anchorage DA's Office, to investigate who is bringing in drugs and selling to the employees of Royal Petroleum.  Dana Stabenow uses her knowledge of the oil industry to give us a fascinating picture of those people who work in the Far North and what their lives might be like.

The last specific book that I will mention is Breakup, the 7th in the series.  Breakup or spring is the time when the bears come out of hibernation, the roads are slushy and muddy, and tempers are short.  Kate is trying to do her taxes, figure out if a bear really killed the man in the woods, and is dodging bullets and honestly crazy people.  Lots of humor here.  And another one that deserves a reread soon.

As I said, there are 20 books in this great series.  I am a bit behind reading them.  I think I have 3 left to catch up, but that works out well because Dana says that she is working on #21.  She's not sure when it will be published.  She also is planning on beginning a book about Cleopatra.  After writing about Marco Polo's granddaughter, she found writing historical fiction a lot of fun.

Dana Stabenow will be the Guest of Honor at next year's Left Coast Crime Convention in Honolulu.  It's called Honolulu Havoc.  Sounds great!  I hope you'll consider picking up one of her books and finding out why she's earned her spot on my 'keeper shelf'.

Join me in a couple of weeks for the next 'kay's favorites from the keeper shelf...' when I'll be talking about Mary Stewart and her wonderful Gothic suspense novels.
Posted by Kay at 12:00 AM